First in War, First in Peace, First in the Garden

Archive for the tag “constitution”

“You ‘Aint Nothing But A Dead, Double-Voting Democrat!”

This week’s freshly cut flowers are cream and cardinal Calla Lilys, or to be more precise, Zantedeschia “Picasso” named after the Spanish Artist whose ability to re-imagine himself and his art has influenced so many including former Governor and Presidential Impressionist, Mitt Romney, whose shape-shifting political personna resembles one of Picasso’s early cubism works. 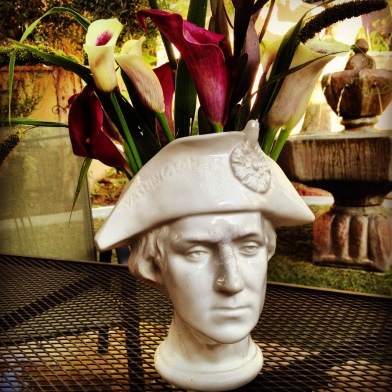 Another unlikely influencer is Hans von Spakovsky, who for more than 15 years has been fanning the flames that voter fraud is a real and persistent danger to America’s Electoral Vote. While legislation mandating byzantine voter ID requirements has been struck down in almost every state it has been proposed, there is no doubt that this is a fight that will come up again. You can read all about Mr. von Spakovsky and his friend’s here.

“One method of assault may be to effect in the forms of the Constitution alterations which will impair the energy of the system and thus undermine what cannot be directly overthrown. In all the changes to which you may be invited, remember that time and habit are at least as necessary to fix the true character of governments as of other human institutions, that experience is the surest standard by which to test the real tendency of the existing constitution of a country, that facility in changes upon the credit of mere hypotheses and opinion exposes to perpetual change from the endless variety of hypotheses and opinion; and remember, especially, that for the efficient management of your common interests in a country so extensive as ours, a government of as much vigor as is consistent with the perfect security of liberty is indispensable; liberty itself will find in such a government, with powers properly distributed and adjusted, its surest guardian.”